Debtor's Prison was where a man was sent when he could not pay his bills. Not a member of the peerage, mind you. They could not be forced to honor their debts if they were of a mind not to. Although the law did not exactly exempt a peer from prosecution for nonpayment of a debt, it was unlikely that a creditor could actually prevail. As a result, few titled gentleman actually feared incarceration. For the common gentleman, however, debtor's prison was a very real threat.
Common prisons for debtors of the time were the Fleet (left) and the Marshalsea (shown below). 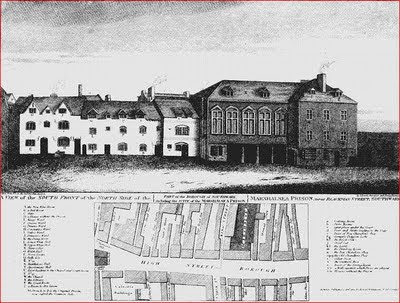 I wasn't aware of Marshalsea and I thought I had researched this particular topic. I am glad to learn this new information.

The romantic query letter and the happy-ever-after said...

Jaimey,
I love your blog and will, now that I have found it be visiting often. Thanks for sharing.
All the very best,
Simone

Simone, thank you so much for stopping by. I'm glad I was able to provide helpful or at least interesting information. :o)

Amy, I'm glad I was able to help and I apologize for not posting my main source for this post. Prisons and Punishments of London by Richard Byrne, p105-9.