Let's get back to the way things were. Here's another snippet on a Saturday for your enjoyment. ;)

Since Gertrude is about to make her debut, I thought I'd share some of her story with you now. This clip is taken from the almost final draft. I'm still editing on this story, so don't be surprised if this changes a bit in the final manuscript.

I hope you like it. Gertrude is very special to me. ♥

Hyde Park was the place to see and be seen most afternoons. One could ride, walk, or drive, dressed in the latest fashions, escorted by the most sought after gentlemen Society could boast. It was every debutante’s dream to make her friends jealous by snaring the company of the one man considered the marital prize of the Season.

Lady Gertrude Shiveley could boast no such conquest. She walked alone, no one but her maid, Margaret, trailing along three paces behind as a good servant must. 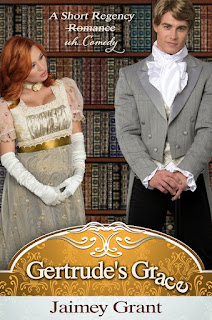 Gertrude longed to ask the other girl to step up beside her but didn’t dare. It would cause talk if anyone saw her being so familiar with a servant. And it would probably embarrass Margaret.

So she continued to amble along, taking the tiny, mincing steps ladies are supposed to take. She wished she could stride the way she was comfortable. Mincing steps were not sufficient to get from point A to point B. She had a destination in mind and she wanted to get there within decent time.

Granted, her destination was merely the other end of the park, but the sooner she got there, the sooner she could turn around and leave. She’d come early enough to avoid the worst of the crowds and hoped to leave before a certain duke showed up with whatever lovely young miss he’d chosen to escort.

Gertrude hated to admit it, but she found Lord Chatterton fascinating. His manners, his poise, his….grace.

A snort escaped her. She admired his grace’s grace. She glanced over her shoulder to see if Margaret heard her unladylike noise, but the girl was staring off into the trees. In fact, she wasn’t even moving anymore, her gaze caught by something that Gertrude couldn’t see.

This one will be released soon, I promise. Thank you for stopping by and have a lovely weekend!