~Snippet Saturday~ The Devil She Knows

I shared a tidbit of The Devil She Knows several weeks ago, back when I was still calling it Surrender. How about another? Ooo, and there’s a cover now, too!

For those of you who don’t know, The Devil She Knows is a short story, just under 10,000 words, that will be released with the compiled edition of Death Becomes Her. It’s the story of Sadie Miller and James Melbourne. Will they get their happy ending?

James Melbourne led a charmed life. Through misstep after misstep he’d emerged on top, unharmed. With a bit of charm and his handsome face he could talk his way out of any situation. Nothing stood in the way of what he wanted. 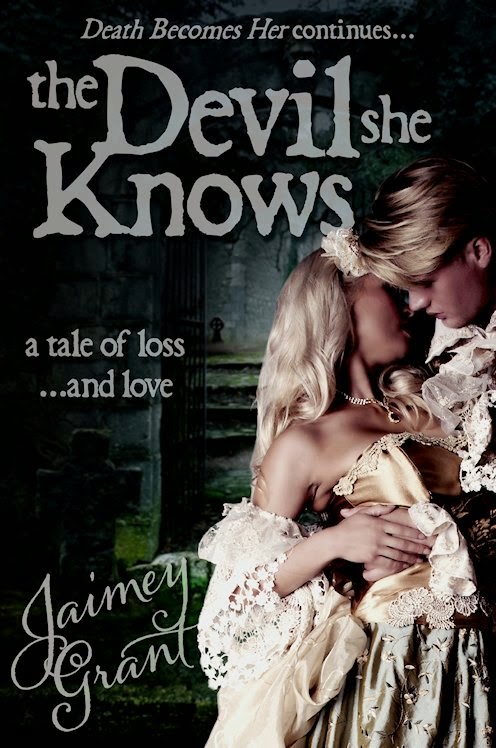 But war was not something one could charm. James had suffered right along with the ugliest, most crass creature, an injury to his leg and the resultant fever ending his bout of good fortune. Though, in all honesty, having escaped death was probably as lucky as one could get.

As he lay senseless, the fever taking over his body again, he longed for home, longed to see the family he’d left behind. He’d never been a sentimental type, but fighting for one’s life had a way of turning one into a simpering milksop.

And, simpering milksop that he was, he missed home. He missed England’s dreary rain and London’s suffocating fog. He missed his overbearing, sanctimonious brother David, and David’s equally judgmental wife.

Then there was Sadie. Beautiful Sadie, low-class and foul-mouthed, damning him one moment and pleasuring him like a courtesan the next, the woman he loved and couldn’t have.

He’d had to leave England, but there were some who didn’t see it that way. Sadie Miller probably despised him and he could hardly blame her. But marriage was out of the question. James would make a terrible husband and Sadie should have a husband worthy of her loyalty.


This story is being formatted along with Death Becomes Her, and should be released by mid-October. Thank you for stopping by! ☺

There’s a jukebox in my head. It’s currently playing
♫♪ Escala ~ Adagio for Strings
at 8:50 AM